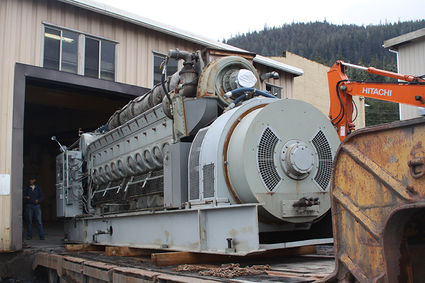 One of the two new generators Wrangell recently purchased from the city of Nome was moved into its new home at Municipal Light & Power last Thursday, Sept. 19. According to Light & Power Director Rod Rhoades, this generator weighs 80,000 pounds and is capable of generating 2.5 megawatts of power.

The Wrangell Municipal Light & Power Department spent most of their day last Thursday, Sept. 19, moving one of their new generators into the power plant. Wrangell recently purchased two generators from the city of Nome to reinforce the department's power generation capabilities.

Rod Rhoades, director, said that all of the city's generators are basically the "plan B" for emergency power. Wrangell's power needs sit between 8-9 megawatts, he said. The borough typically draws its power from Tyee Lake, as part of the Southeast Alaska Power Agency. Diesel generator runs have become necessary...