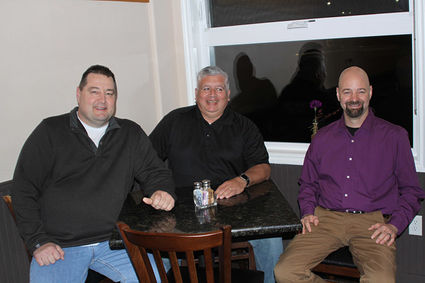 City officials held a meet and greet for three police chief candidates at the Stikine Inn last Monday evening, Nov. 11. Wrangell has been searching for a new police chief since the retirement of Doug McCloskey, who was chief from 2003 to this year. Back in September, the assembly approved an increase to the job's pay grade in an attempt to draw more interest to the position. There were three candidates at the meet and greet (left to right): Thomas Radke of Kenyon, Minnesota, Eric Hurtado of California City, California, and Derek Bos of Brush, Colorado. All three men have experience as police chief, according to the assembly. According to city employee Aleisha Mollen, the candidates were given tours of city facilities and the opportunity to meet with the local police department, as well as a written and oral exercise before a mock assembly meeting planned for Tuesday, Nov. 12.