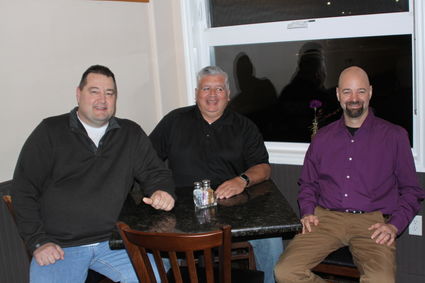 City officials held a meet and greet for three police chief candidates at the Stikine Inn on Monday evening, Nov. 11. Wrangell has been searching for a new police chief since the retirement of Doug McCloskey, who was chief from 2003 to this year. There were three candidates at the meet and greet (left to right): Thomas Radke of Kenyon, Minnesota, Eric Hurtado of California City, California, and Derek Bos of Brush, Colorado.

Wrangell residents had the opportunity last week to meet three people who are interested in the position of Wrangell Chief of Police.

The job has been open since former chief Doug McCloskey retired this summer. Eric Hurtado, Thomas Radke, and Derek Bos are all from out of state and have experience running a police department.

Eric Hurtado received bachelor's and master's degrees in business administration from the University of Phoenix in 2002 and 2005, respectively. He worked as a lieutenant with the California City Police Department from 1993 to 2010. Hurtado served as the...