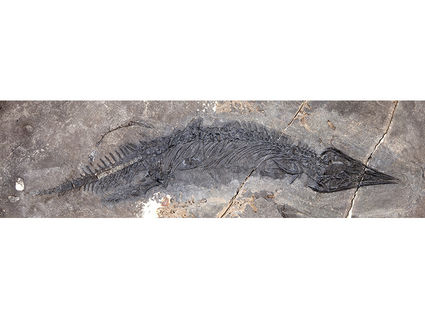 Photo courtesy of University of Alaska Museum of the North

The fossil of Gunakadeit joseeae, which was found in Southeast Alaska. About two thirds of the tail had already eroded away when the fossil was discovered.

Scientists at the University of Alaska Fairbanks have identified a new species of thalattosaur, a marine reptile that lived more than 200 million years ago.

The new species, Gunakadeit joseeae, is the most complete thalattosaur ever found in North America and has given paleontologists new insights about the thalattosaurs' family tree, according to a paper published recently in the journal Scientific Reports. Scientists found the fossil near Keku Island near the village of Kake in 2011.

Thalattosaurs were marine reptiles that lived more than 200 million years ago, during the mid to late Tria...