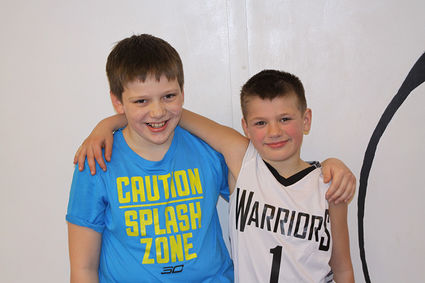 Two Wrangell kids, participants in the local Elks' Hoop Shoot tournament back in December, will be traveling to Pasco, Washington this spring to compete in a regional tournament. Aadyn Gillen (left) and Michael Cook (right) competed in the 10 and 11-year-old category 8 and 9-year-old category of the Hoop Shoot, respectively. They both took first place in their age categories. "We've been practicing a little bit, improving a little bit, so hopefully when they go down there they'll do well,'' said Jeff Jabusch, organizer of the Wrangell Hoop Shoot. The Northwest Region 1 Hoop Shoot Semi-Final will bring together kids from Alaska, Oregon, Washington, and Idaho. Gillen and Cook will be leaving for the competition on March 10. The winners of these semi-finals, from across the country, will be invited to compete in a National Hoop Shoot in Chicago this April.