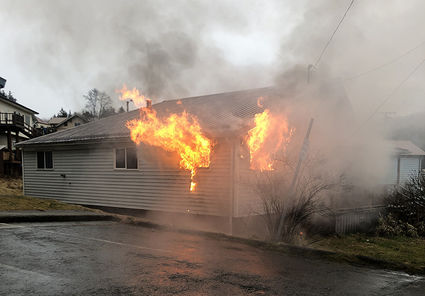 The home of Bear and Josh Jenkins caught fire last Thursday afternoon, March 5. The fire department responded to the call at roughly 3:45 p.m., and had the fire put out a little after 4 p.m.

A Wrangell home caught fire last week, and firefighters suspect a candle is to blame. The fire occurred around 3:45 p.m. last Thursday. The residence, home to Jim "Bear" Jenkins and his son Josh Jenkins, is located on Second Street, next door to the Irene Ingle Public Library. The Wrangell Volunteer Fire Department responded to the call quickly, and had the fire put out shortly after 4 p.m. Nobody was home when the fire began however, the Jenkins' dog, Rowdy, was inside at the time. Fortunately, Rowdy was rescued by firefighters with no injuries.

"We were at the house about half an hour pr...