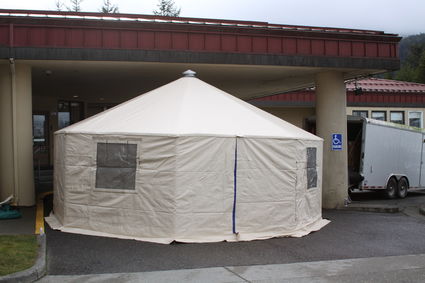 A screening tent was set up in front of the Wrangell Medical Center late last week. Hospital Administrator Leatha Merculieff explained that the tent is going to serve as a screening site for people visiting the hospital, part of the medical center's "surge plan" in the event COVID-19 spreads to Wrangell. The hospital is trying to keep people out of the emergency room as much as possible, she said, to keep it clear for people who really need it. SEARHC also has a trailer set up at the AICS clinic, on Wood Street, which Merculieff said is where tests for COVID-19 are conducted.

The Southeast Alaska Regional Health Consortium, according to several members of Wrangell's local government, has been doing a very good job of communicating with them during the ongoing COVID-19 pandemic. Assembly Member David Powell said that communications between SEARHC, Mayor Steve Prysunka, and Borough Manager Lisa Von Bargen have been taking place almost daily. Prysunka and Von Bargen are really on top of things, he said. Assembly Member Drew Larrabee added that, in his opinion, communication between all state and local government and health entities has been well orchestrated during...