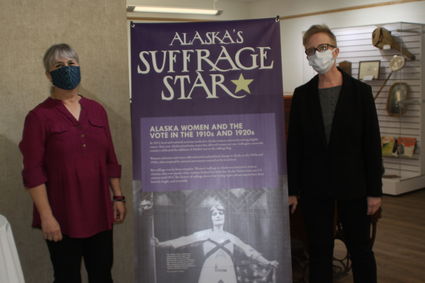 Cindy Kilpatrick and Cyni Crary standing at the entrance to Alaska's Suffrage Star, the newest exhibit at the Nolan Center.

The Nolan Center's newest museum exhibit, "Alaska's Suffrage Star," opened for public viewing on July 1 last week. The exhibit covers the history of the women's suffrage movement in Alaska, how activists worked to be part of a nationwide movement to give women the right to vote. The exhibit shares the stories of several Alaskan activists, some of them Wrangell locals.

One Wrangellite featured in the exhibit is Tillie Paul Tamaree. Tamaree was a Tlingit woman of the Teeyhittaan Raven clan, according to the exhibit about her. She worked as a tribal historian, teacher, and translator in Wrang...