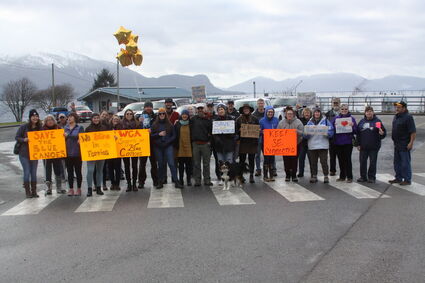 Wrangell residents held a rally at the ferry terminal Feb. 11, to demonstrate their support of the Alaska Marine Highway. Southeast Alaska communities have lost the use of the ferry system after the Matanuska was laid up for repairs, and other ships in the ferry system are similarly out of service for the time being. Rallies were held in towns across the region, including in Petersburg and Juneau.

Jan. 2: Along with the lights, trees and carolers, the Salvation Army's red Christmas kettles are a common sight during the holiday season. Lt. Jon Tollerud, Wrangell's new corps officer, said the red kettles brought in $10,469.

Jan. 9: The Nolan Center celebrated the new year Dec. 31 with a murder mystery party. As this new year marks a new decade, a return to the '20s, the party had a 1920s theme to it. With jazz music, themed costumes and masks, partygoers had the chance to return to the previous century. The main theater of the Nolan Center was decorated to look like a Prohibiti...