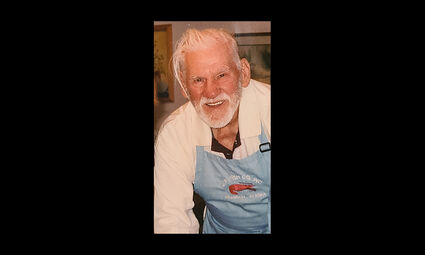 He was born in Calumet, Michigan, in October 1919. He was the fifth of nine children born to Anna and Paul Holland. The family resettled in Rock Island, Illinois, in the 1930s, where he met and married Rosemary Normoyle in 1942. They built a home on a little farm and raised six children, near dozens of relatives in the area.

Puzzy served in the Seabees in the U.S. Navy during World War II from 1942-45. He became skilled in refrigeration, and after returning from the war he became a machinist at Bendix and the Rock Island Arsenal. In 1967, the family moved to Ewa Beach, Hawaii, and he worked at Pearl Harbor as a machinist.

He was always extremely active and adventurous, taking up his most loved hobby, sailing on his 32-foot sloop. He seemed to try out everything, hang gliding, scuba diving, snorkeling, racquetball, tennis, bike touring, extreme kite flying, and pottery.

In 1987, Rosemary passed away, and in 1989 Puzzy married Barbara Webb. There seemed to be no slowing down though as he jumped right into the role of raising Barbara's two young daughters, Emma and Jane Endicott.

After 15 years in Fairbanks, the family moved to Wrangell in 1994, where Puzzy's daughter, Wendy Olson, and husband Mark, had just become the pastors of the Presbyterian Church. Though it was intended to be a short-term move, they fell in love with the community and the community fell in love with them. Here he enjoyed sailing, fishing, pottery, woodworking and poker games at "Puzzy's Poker Palace."

In 2003, he moved to Salem, Oregon. Even throughout his 90s, he remained strong and active: cutting, hauling and splitting trees for firewood and lumber, building furniture, more pottery, camping, traveling and gardening.

His hallmark above all though was his capacity to love beyond measure. He was always on hand to help family and friends with projects, lend his amazing wisdom, and make everyone feel special and loved "very much." He loved being with his people and especially the little ones. "We will forever remember him, as loving us, and living to the fullest," his family and friends wrote.

A small, local family memorial was celebrated in his backyard. A larger service will be postponed until travel becomes safe again. A longer obituary is at legacy.com.