Dogs passed near Wrangell on their way south 10,000 years ago 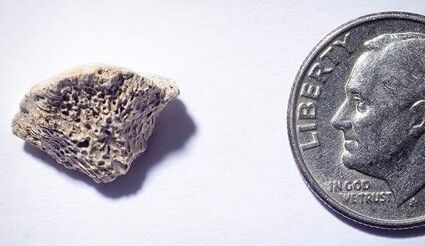 Courtesy of Douglas Levere, University at Buffalo, The State University of New York

Researchers determined that this bone fragment, found in a cave across Blake Channel from Wrangell, came from a dog that lived about 10,150 years ago

It was an international effort that started on a long journey about 10,000 years ago through what is now a cave on the mainland, across Blake Channel from Wrangell Island.

A bone chip smaller than a dime, found almost 25 years ago by a University of South Dakota researcher, was being held at the University of Alaska Fairbanks Museum of the North. It was examined again by scientists with the University at Buffalo, State University of New York, who published their study last month in the London-based Royal Society's flagship biological research journal.

The chip is a small piece of a leg bone...