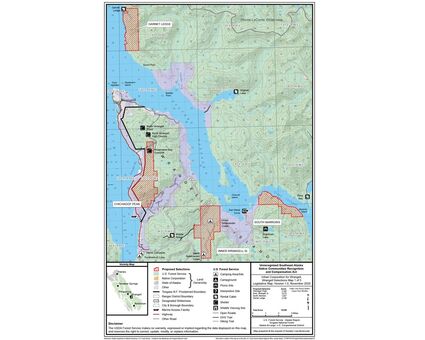 The Alaska Natives Without Land campaign has identified several potential land selections in the area, should their effort win congressional approval to establish a Wrangell Native corporation. The parcels include land at the Garnet Ledge, near Shoemaker Bay and along Salamander Creek in the middle of Wrangell Island. The group has identified the red cross-hatched areas as possible land selections. Click on the map to view a full PDF.

The Alaska Natives Without Land campaign, working to win congressional approval of a Native corporation for Wrangell, has proposed several parcels near the community for transfer, including 2,146 acres at the Garnet Ledge on the mainland near the Stikine River, 3,168 acres around the Shoemaker Bay overlook and Chichagof Peak south of town, and 3,275 acres along Salamander Creek in the inner portion of Wrangell Island.