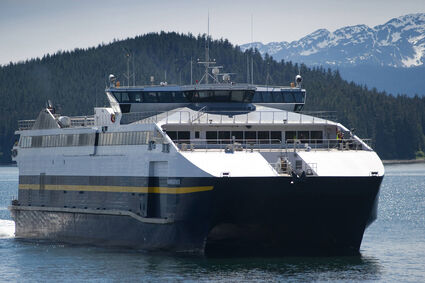 The Alaska State Marine Highway Ferry Fairweather pulls up to the Auke Bay Terminal in June, 2014.

After spending almost $1.1 million to keep the vessels out of service to save money and safely tied up the past several years, the state last week sold its two fast ferries - built at a combined cost of $68 million less than 20 years ago - for just over $5 million.

Mediterranean-based catamaran operator Trasmapi had offered about $4.6 million for the Fairweather and Chenega. The company serves the Spanish island of Ibiza, about 70 miles off the coast. The state was able to negotiate the final price to $5,174,444.

The price for two never-used spare diesel engines for the ships is being negot...