Alaska and Maine show the way for ranked-choice voting 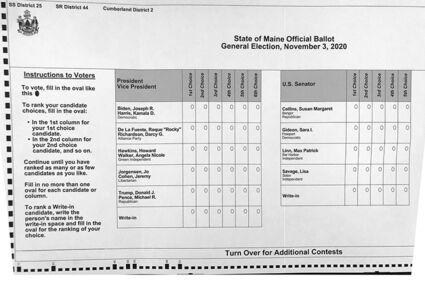 Maine is ahead of Alaska and both are ahead of other states in moving to ranked-choice voting. This absentee ballot for the 2020 Maine general election shows how voters are allowed to rank candidates in order of preference. Alaska will switch to ranked-choice voting in 2022 for all statewide and legislative offices - but not president.

FALLS CHURCH, Va. (AP) - An electoral reform that has taken root in the iconoclastic states of Maine and Alaska could be gaining traction nationwide.

Ranked-choice voting, a concept that was relegated to theoretical discussions among policy wonks for decades, is now being promoted by advocates in other states, building on last year's successful initiative campaign in Alaska - though the Alaska victory was tight, with a 3,778-vote victory out of 345,000 ballots cast.

A major push is under way in Wisconsin to enact similar reforms. New legislation in Virginia allows towns and cities to employ...