Isolated Alaska towns among the leaders in vaccination rates 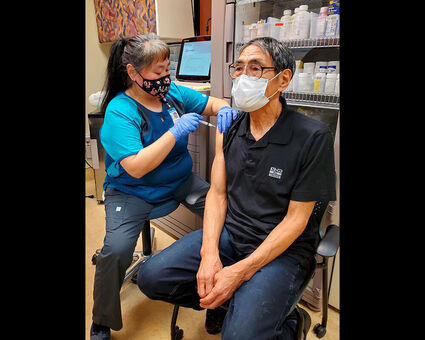 Nurse LaVerne Saccheus administers a vaccination to Unalakleet elder Joseph "Nupid" Katchatag last December. Alaska's highest vaccination rates among those 16 or older have been in some of its remotest, hardest-to-access communities, where the toll of past flu or tuberculosis outbreaks hasn't been forgotten.

John Waghiyi remembers rushing his cousin to the clinic in the Bering Sea city of Savoonga in December, worried he was having a possible heart attack while out butchering a bowhead whale. Waghiyi arrived to see elders waiting in the lobby for a COVID-19 vaccine.

Waghiyi, 66, said he joined them and got a shot before returning to the coast to help finish the whale harvest.

Elders, he said, have set the tone in the Alaska Native community of 735 on the coast of isolated St. Lawrence Island. Vaccination rates for eligible residents 16 or older are among the region's best, with more than 80% ha...