By Caleb Jones
The Associated Press 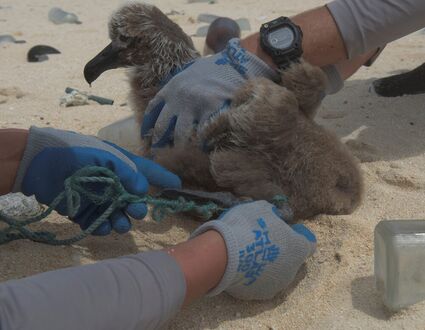 Kevin O'Brien (left) and Joao Garriques disentangle a black-footed albatross chick on Laysan Island in the Northwestern Hawaiian Islands on April 5. Crews scoured the region for marine plastic and abandoned fishing nets that threaten to entangle endangered Hawaiian monk seals and other marine animals on uninhabited beaches stretching for more than 1,300 miles north of Honolulu.

HONOLULU - A crew returned from the northernmost islands in the Hawaiian archipelago last month with a boatload of marine plastic and abandoned fishing nets that threaten to entangle endangered Hawaiian monk seals and other animals on the uninhabited beaches stretching more than 1,300 miles north of Honolulu.

The cleanup effort in Papahanaumokuakea Marine National Monument lasted three weeks and the crew picked up more than 47 tons of "ghost nets" and other marine plastics such as buoys, crates, bottle caps and cigarette lighters from the shores of the Northwestern Hawaiian Islands.