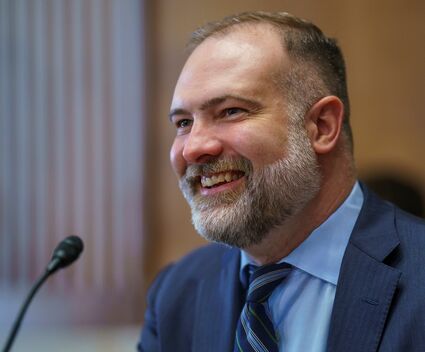 Tommy Beaudreau appears before the Senate Energy and Natural Resources Committee hearing April 29 on his nomination to be deputy secretary of the Department of the Interior. Beaudreau, who grew up in Alaska and is politically close to Sen. Lisa Murkowski, was the first director of the department's Bureau of Ocean Energy Management under the Obama administration.

WASHINGTON (AP) - The White House is naming Tommy Beaudreau, a former Obama administration official, to be deputy secretary at the Interior Department after dropping plans for a more liberal nominee who faced key Senate opposition.

President Joe Biden on April 14 nominated Beaudreau, a former chief of staff at the department who was the first director of the Bureau of Ocean Energy Management. The agency, created after the disastrous BP oil spill in the Gulf of Mexico in 2010, oversees offshore drilling and wind power.

Beaudreau grew up in Alaska and is politically close to Republican Sen. L...