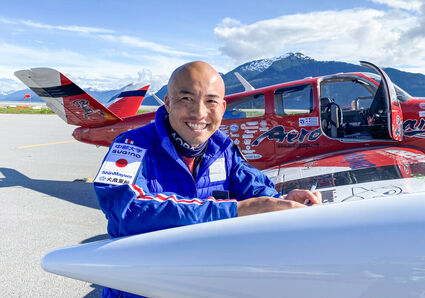 Shinji Maeda and Lucy, his 57-year-old Beechcraft Bonanza, were ready last Friday for the final leg of their flight around the world. Wrangell was Maeda's last stop before returning to Washington state to complete his 43-day circumnavigation of the globe.

"If you have the dream, or hopes, just try that," Shinji Maeda said. "Put the effort to make that happen, not sit and complain about your life. That's the whole purpose of this flight."

Maeda, 41, is an engineer for Boeing, a one-eyed pilot, a flight instructor, and recently completed a 43-day flight around the world. His last stop before flying home and completing his journey was in Wrangell last Friday.

His flight brought him to 18 different countries in a single-engine 1963 Beechcraft Bonanza named Lucy. The trip, and his life story, was to prove that anything can be possible with enough...