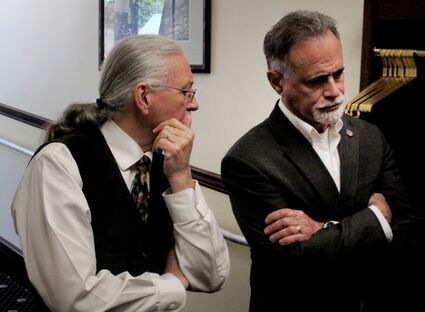 Alaska Senate Minority Leader Tom Begich (left) and Senate President Peter Micciche talk as they await action in the House on the state budget June 28. The Legislature finished its budget work later that day, and then three days later Gov. Mike Dunleavy vetoed multiple items in the spending plan, including this fall's Permanent Fund dividend - which Dunleavy wants to be larger than lawmakers approved - adding to the work list when the Legislature gathers for another special session on state finances Aug. 2.

Legislators are scheduled to return to Juneau next month and will try again to settle on an amount for this fall's Permanent Fund dividend after the governor vetoed the $525 PFD appropriated by lawmakers.

The Legislature's budget writers had negotiated an $1,100 dividend, but the amount was tied to other items in the budget, and proponents of a bigger PFD objected to the amount and to the linking maneuver, denying their votes for sections of the spending bill that would have pulled additional funds from savings to pay the dividend.

The failure to achieve a three-quarters majority vote in th...