By Matthew Brown and Felicia Fonseca
The Associated Press

Tribes disagree on benefits versus harm of oil production 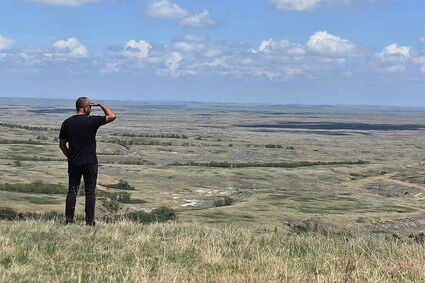 Joseph McNeil Jr., manager of Standing Rock's energy authority, looks over the site of the proposed 235-megawatt Anpetu Wi (Morning Light) wind farm in the Porcupine Hills on the Standing Rock Sioux Reservation near Fort Yates, North Dakota. Tribal officials predict the project could power roughly 94,000 homes and could double their annual revenue - just as oil has benefited other tribes.

About half their 16,000 members live on the Fort Berthold Indian Reservation atop one of the biggest U.S. oil discoveries in decades: The Bakken shale formation.

The drilling rush has brought the tribes unimagined wealth - more than $1.5 billion and counting - and they hope it will last another 20 to 25 years. The boom also propelled an almost tenfold s...