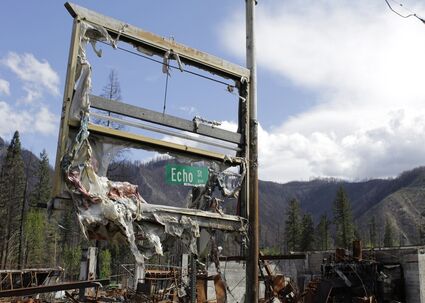 The frame is all that remained of a melted gas station sign in Blue River, Oregon. The unincorporated community along the McKenzie River east of Eugene was one of many places in western Oregon devastated during a 72-hour firestorm last fall. The state's unprecedented fall 2020 wildfire season burned 4,000 homes and more than 1 million acres in areas that are not normally associated with wildfire.

OTIS, Ore. (AP) - Wildfire smoke was thick when Tye and Melynda Small went to bed last Labor Day, but they weren't too concerned. After all, they live in a part of Oregon where ferns grow from tree trunks and rainfall averages more than six feet a year.

But just after midnight, a neighbor awakened them as towering flames, pushed by gusting winds, bore down. The Smalls and their four children fled, as wind whipped the blaze into a fiery tornado and trees exploded around them.

When it was over, they were left homeless by a peril they had never imagined. Only two houses on their street in Otis...