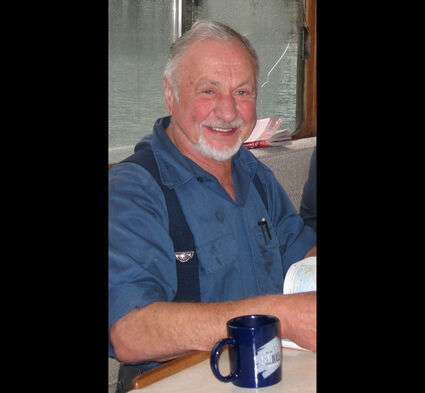 Longtime Wrangell resident Chuck Traylor, 86, died July 13 at Wrangell Medical Center. As Chuck would say, he had a good run, his family wrote.

He was born in Nebraska in 1934, and his family was in and out of Alaska several times in the 1940s and early 1950s before settling in Alaska permanently.

In 1948, the Traylor family was living at the floating logging camp in Hood Bay on Admiralty Island. There, Chuck and his sister, Vona, adopted a starving orphaned fawn, raised it, and released it. They also cared for twin bear cubs, the family wrote. Chuck reminisced about one of the cubs being sweet and easy, and the other one being ornery and knocking the nice cub off of the floating walkway and into the bay.

That summer Chuck found paying work fishing for halibut out of a small wooden rowboat to add to the camp menu. He also ran a laundry service for the loggers.

In the winter of his 14th year, while much of the bay was frozen, Chuck would walk for the logging camp's mail. He walked several miles and then signaled the winter caretaker of the cannery across the north arm of Hood Bay by setting off sticks of dynamite. The caretaker would run across in the skiff to exchange the mail.

Chuck was in the woods working as a stinger man on the tip of the bar of his father's 120-pound Titan two-man chainsaw at age 15. It was during those logging camp days, when the Grumman Goose aircraft brought loggers and freight to the camps, that Chuck's interest in flying sprouted, his family said.

At age 16, Chuck spent some time in Washington state. He jumped onto a bus full of men heading for a forest fire. Chuck agreed with a fire boss that he was 18 years old, and joined the crew. He ran chainsaw, clearing brush and felling trees at the fire line.

In his late teens he worked at Ellis Airlines in Ketchikan, assisting in the shop.

Chuck was drafted and served in the U.S. Army. He was stationed in Germany.

Chuck and his Stikine Air crew served logging camps, took locals and tourists to lakes and up the Stikine River, operated flightseeing tours, and provided the medivac service for Wrangell. He sold Stikine Air in the late 1970s.

After leaving the air travel business, he got his six-pack Coast Guard captain's license and took tourists on Stikine River trips, as well as out fishing. He delivered freight in his boat The Runner to Bradfield Canal when the Tyee hydroelectric power plant was being built. When it was time for another change, he commercial fished for Dungeness crab and spot prawns with the Little Gem.

Chuck enjoyed running the Stikine River in his river scow, spending time at his cabin at the Zimovia Islets, rockhounding, singing a tune at the local bar, and drinks with friends.

He used to joke that he's a has-been because he "has been about all you can be in Alaska."

He was preceded in death by wives Sharon and Yvonne. Survivors include his partner, Donna Grover; three daughters; and numerous grandchildren and great-grandchildren.