By Daisy Nguyen
The Associated Press 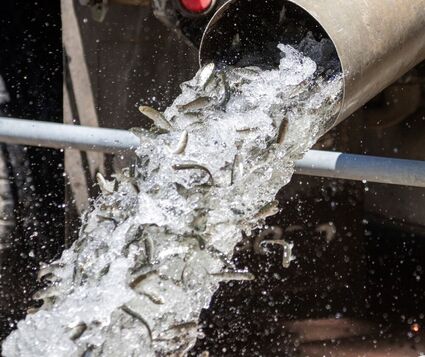 (Travis VanZant/California Department of Fish and Wildlife via AP)

A hatchery truck unloads juvenile chinook salmon from the Iron Gate Fish Hatchery, Siskiyou County, California, into the Fall Creek facility on July 7. Recently, California fish and wildlife officials decided not to release more than 1 million hatchery-raised baby chinook into the wild, and instead drove them to several hatcheries that could hold them until Klamath River conditions improve for their release.

SAN FRANCISCO (AP) - Baby salmon are dying by the thousands in one California river, and an entire run of endangered salmon could be wiped out in another. Fishermen who make their living off adult salmon are sounding the alarm as blistering heat waves and extended drought in the U.S. West raise water temperatures and imperil fish from Idaho to California.

Hundreds of thousands of young salmon are dying in Northern California's Klamath River as low water levels brought about by drought allow a parasite to thrive, devastating a Native American tribe whose diet and traditions are tied t...