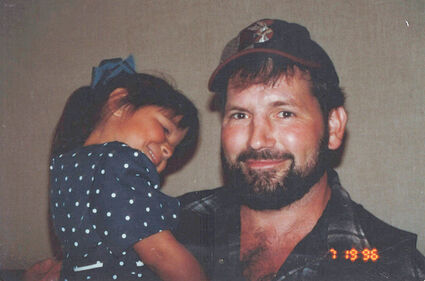 Clayton died suddenly in his home of 45+ years in Coffman Cove, Alaska. He was born in Santa Barbara, CA, and shortly after birth moved to Alaska when his mother, Marcella Smalley "Opheim," returned home. While not born in Alaska he was the essence of an Alaskan man, hardy, handy, possessing the inner strength and will to conquer whatever came his way.

He was raised in a fishing family, spending summers at the family fish camp on Prince of Wales Island with his siblings and grandparents, Roy and Maude Opheim, while mom worked at the Waterfall cannery near Hydaburg. Each of us had our own skate and enjoyed the challenge of going alone to set and pull our gear. Camping on the beach every night, up before dawn to troll, gillnet or check our skate engrained a strong work ethic that few folk sleeping in a warm cozy bed can understand.

It was while living in Lake Bay (our remote homestead), he would skiff over to Coffman Cove and visit the sons of the camp owner, Mike Valentine, who saw the potential of the young man who followed the mechanics around, hunger for learning in his eyes. At 15 or 16 years old, Clay was given an unofficial apprentice position in the shop where he honed his mechanical skills which he put to use in the years to follow working as an engineer on tug boats and fishing vessels. During one of his skiff rides from Lake Bay to the Cove, he came upon a NOAA vessel anchored out. He was intrigued by the site of such a stately and important ship in his bay and went up to it to "talk , ask questions." This went on for several days and long story short he impressed the captain of a NOAA ship with his ability to handle a skiff so much so that he was offered a job and thus began a two-year adventure on the high seas traveling far north up the Alaska coastline and south to California.

On return from his NOAA adventure, he was officially hired by Valentine Log where he graduated from the shop to working in the woods starting at the bottom and working his way up to become a skilled feller. He does tell of one incident of falling a tree on the crummy. He was learning. He traveled throughout Southeast Alaska, experiencing bunkhouse camp life and even did some logging "Outside" on a whim for the fun of it. "You wear your woolies no matter the heat, it cools you down!" In later years he was the Bull Buck, which he did not like so much. Telling others what to do, more than once, was not something that came easy for him, sometimes not at all. He wanted to fall trees, sizing up the terrain and falling on target. Alone just him and his chainsaw and the smell of fresh sawdust.

The Cove was growing and the state decided to put in a ferry system. Clay was excited at the opportunity to work near home, and so he applied to and graduated top of his class from a diving school in Seattle, which included underwater welding.

The welding skills he learned led to him running his own business which he called "Whale Welding". His custom woodstoves sit proudly in many homes on Prince of Wales island including Forest Service facilities. We grew up with the barrel stove in the center of the cabin, sides sometimes glowing red, able to see the fire through the door cut with tin snips. It's how you did it back in the day with no cutting torch. His desire to improve on the stove of his youth were a testament to life skills he learned while a boy at his grandpa's side, absorbing every bit of knowledge shared. He adored and revered his grandpa.

Clayton was, as one person said, "The man John Wayne wanted to be." He lived life full bore, walking daily to get his joints ready for the harsh work out to follow. If you called him at 5 a.m., he had already been up for hours and was ready to take on the day. He'd tell you what he wanted to accomplish that day. Put his skiff in the bay so he could go check the neighbors house, welding on something big like a boat or bucket off a loader, cut a couple cords of wood. Build a house, build a breakwater, build a stove, pull some logs off the beach, maybe shoot a deer if one happened along, his list of to-dos was monsterous and he spoke of them, not as a chore but as something he wanted to do and the goal was get'ter done! I read in our tribal paper, "Spruce Island Waves," that shareholder Kathryn Chichenoff had a saying: "Aleuts don't complain they just do." This is so very true of Clayton.

He was a key figure on the Cove rescue team and told of rescues that would make most run the other way. Raging seas, dark of night, blowing rain and snow. If you were in trouble, he would find you and bring you home. He loved the sea and she was part of his soul.

If his prize whaler, he named "Moving Violation," could talk it would tell of prop only in the water, friends having a blast, white knuckles gripping anything anchored down. Notorious for the "29 min" ride Coffman Cove to Wrangell.

His diving skills not only got him side jobs getting nets out of propellers, finding lost anchors, etc., but it also was an easy segway into cucumber diving which he did with his brothers for several seasons.

I know this is long but I hope you understand how hard it is to put the life a a man who lived like he was invincible and could do anything on one page.

He enjoyed many seasons herring fishing from Sitka to Togiak with his brother-in-law, who was also on the crew. Hundreds of glass balls made their way back to Southeast Alaska after his beachcombing adventures. He took pictures of large groups of walrus sunning on the beach with tusks 4-feet-plus long.

He loved hunting and told of beautiful mornings high on a mountainside, the smell of coffee and moist Southeast air. Alone was best he said. He loved trout fishing after mastering the rapids in his skiff to get to his "I'd have to kill you if I told you where it is" fishing hole. Just him and and his favorite rod, patiently casting into a tree-shaded eddy. "That's where the big ones hide."

One of his last big adventures which he had mulled around for years was to hike the Chilkoot Trail. He accomplished this goal when he was 60. He not only summited the "Golden Staircase" but took his sister's pack up as well when she was struggling.

Clayton was not married and had no children. He is survived by his family and many friends who will miss him so very very much.

Clayton was our rock.