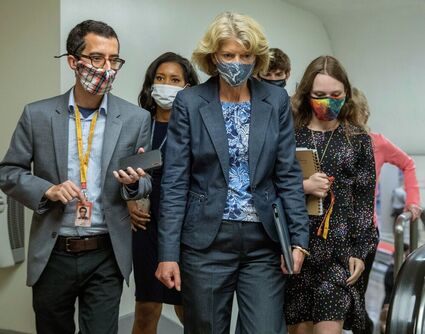 Alaska's senior U.S. senator, Lisa Murkowski, succeeded in adding several provisions to the trillion-dollar infrastructure package that will benefit Alaska, including more federal aid for the state ferry system. Murkowski, speaking to reporters Aug. 4 on Capitol Hill, was among a bipartisan group of senators who negotiated the deal that won Senate approval on Tuesday.

The 2,700-page, trillion-dollar infrastructure bill that passed the U.S. Senate on Tuesday could provide tens of millions of dollars, maybe more, to help the ailing Alaska Marine Highway System.

How to use the money - assuming Congress approves the final package later this year, which is far from certain - would be decided by the governor and Alaska legislators next year.

"We can't allow it to be a total replacement of the state's responsibilities," Robert Venables, executive director of the Southeast Conference, said Monday.

He hopes the state would use the additional federal funding to im...