Leonard Angerman remembered for his wit, smiles and stories 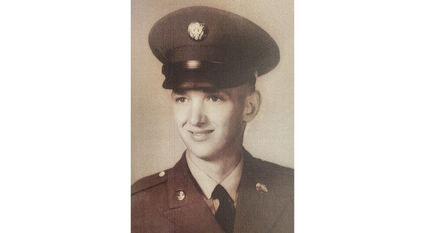 Leonard Charles Angerman was born at home June 12, 1935, and died Sept. 22, 2021, at Wrangell Medical Center. "His 86 years were full of bumps and obstacles, which he met with courage, hope and a positive attitude," the family wrote.

One of the toughest was the death of his 51-year-old father. His mother had $500, four children, and a cab business to run.

His parents, Fritz and Helen, had emigrated from Austria and were hard workers who successfully instilled that into their children Fred, Helen, Leonard and Dick. At a young age, Leonard sold Wrangell Sentinels for 10 cents, earning a nickel for each sale. "He saved $12 to buy a bike from Montgomery Ward so he could ride around the bay to sell papers to the bachelor fishermen who always gave him 25 cents! He laughed about not saving enough money for freight on the bike. His father loaned him the cost with the stipulation he pay it back - which he did."

The neighborhood gang consisted of his older siblings, Felix and Dolly Villarma, Olaf B. Hansen, Ralph Deveny and Alfred Oglend. Cutting halibut cheeks and fishing for scrap fish off the dock to sell to the mink farmers Chinky Nore and the Eyons were their pastimes, with games and some escapades to add gray hairs on their parents.

Leonard worked with Lew and Winnie Williams typesetting for the Sentinel, and had jobs at the lumber mill, on fish traps with Olaf Hansen, gillnetting with Winston Davies, driving cab for the family business, and was relief engineer at the Wrangell Cold Storage under the tutelage of John Byrd and a deckhand for Alan Ritchie on the riverboat dredging sand.

He spent time as an altar boy and eventually sang in the church choir.

Graduation from Wrangell High in 1955 and marriage to Kathleen Rooney on Dec. 11, 1957, at St. Philip's were next. One month later, January 1958, Uncle Sam invited him to join the Army, and in February 1958 he joined his unit at Fort Ord, California. After basic training, he was sent to the University of Virginia for court recording training. The next hurdle was being sent to Korea to manage the office of a colonel for 14 months. He had hoped for Germany so he could pop into Austria and meet relatives, but only the single guys were deployed to Germany - married guys went to Korea.

After arriving back home, he purchased a house and welcomed his sons, Scott in 1960 and Steve in 1963. Parenting - scouting, Little League, family camping at cabins on the Stikine and at Ideal Cove - rushed the days and years along. His brother, Fred, offered a partnership in the purchase of the Totem Bar and liquor store. After 38 years they first sold the bar, but had to reclaim it for many more years until it was successfully sold.

He served 36 years with Wrangell's volunteer fire department, ending as assistant chief, and was active for years on the boards of Wrangell Senior Apartments and Muskeg Meadows.

"Retirement was great except for health issues which he tackled positively," the family wrote. "Leonard survived the sinking of the Rebel, a broken heel, fractured back, empyema, colon and prostate cancers - but other cancers and a weakened heart were too much."

Treasures in his life were his family and a multitude of friends. Family includes his wife, Kathie; sons and their wives Scott and Lorri, Steve and Beverly; grandchildren Jessie Marie, Derek Scott and wife Adrienne, and Kyle Scott; great-granddaughters Adalyn and Kinsley; brother Dick Angerman and wife Barbara, and a sister, Helen Berg; brothers-in-law Rob Rooney and wife Sharry, Brian Rooney and son Sean, Ronan Rooney and wife Mary; mother-in-law Alice Rooney; sisters-in-law Mercedes Angerman, Dorthea Rooney and Lauran Woolery; 18 nieces and 29 nephews; and friends too many to count.

"Leonard will be remembered as a good man with a quick wit, smile and countless stories. He'll not be forgotten."

"Memorials in his memory may go to your personal favorites or ours, St. Philip's Church, Wrangell Fire Department, American Legion Auxiliary or the senior center," the family wrote. "He loved Wrangell."