Area moose hunt tops 100 for eighth year in a row 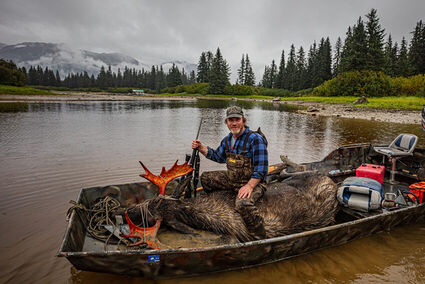 Les Woodward sits atop the young bull he killed on Sept. 15, opening day of moose season up the Stikine River.

Moose hunting season came to an end on Oct. 15, and the trend to top 100 kills in the region continued for the eighth year in a row.

According to Frank Robbins, Alaska Department Fish and Game wildlife biologist, 85 moose were killed in Unit 3, which includes Wrangell, Mitkof, Kupreanof, Woewodski and Zarembo islands. Of those 76, five were on Wrangell.

Unit 1B, which encompasses Farragut Bay, the Stikine River, Thomas Bay and other mainland areas, had 34 legal kills. The Stikine had the majority at 20.

There were two illegal kills in 1B and eight in Unit 3. Robbins said some of the illegal...