Wreck of former Alaska cutter found in the Atlantic 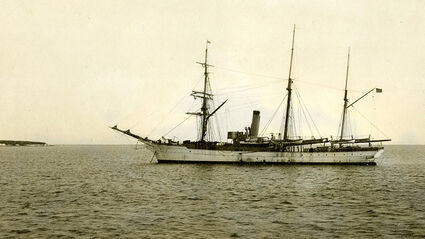 The U.S. Revenue Cutter Bear sits at anchor while on Bering Sea patrol off Alaska in July 1908. The wreckage of the storied vessel that served in World Wars I and II and patrolled Arctic waters for decades has been found, the Coast Guard said Oct. 12.

BOSTON (AP) - The wreck of a storied military ship that served in two World Wars, performed patrols in waters off Alaska for decades, and at one point was captained by the first Black man to command a U.S. government vessel has been found, the Coast Guard said Oct. 14.

A wreck thought to be the U.S. Revenue Cutter Bear, which sank in 1963 about 260 miles east of Boston as it was being towed to Philadelphia, where it was going to be converted into a floating restaurant, was located in 2019.

But it was only in August that a team of experts looking at the evidence concluded that they are "reas...