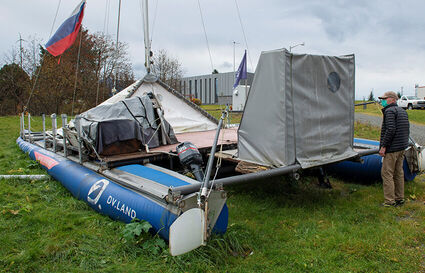 Bill Foster checks out the 40-foot Russian-flagged inflatable catamaran Iskatel that has been hauled out near the University of Alaska Southeast parking lot in Sitka for the past two years. The pandemic put a halt to the international sailing trip, but the skipper, Anatoly Kazakevich, is hopeful about resuming the adventure next spring and sailing to Siberia.

Two years ago, a Russian-flagged inflatable catamaran sailed into Sitka, concluding a multi-year voyage from central Russia, through the Siberian river network, across the Bering Sea and along the Alaska coast.

The vessel's Siberia-based crew now plans to repeat the voyage in reverse next spring and summer.

Owner and captain of the Iskatel, Anatoly Kazakevich, said he had planned to begin the return trip last summer, but the pandemic sank those plans.

The Iskatel - which translates to English as "The Seeker" - arrived here in August 2019, aft...