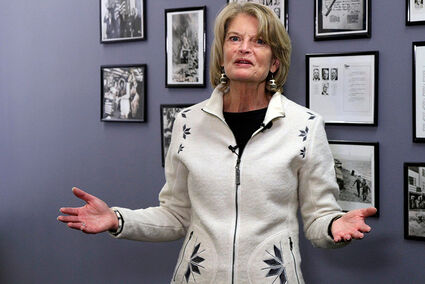 Sen. Lisa Murkowski speaks to reporters after filing for reelection at the state Division of Elections office in Anchorage last Friday. The incumbent Republican already has a challenger from her own party, a former member of Gov. Mike Dunleavy's Cabinet endorsed by former President Donald Trump.

WASHINGTON (AP) - Republican Sen. Lisa Murkowski, who voted to convict President Donald Trump in his second impeachment trial and had called for his resignation after the Jan. 6 insurrection, announced last Friday she will run for reelection in 2022.

Trump, who has focused on punishing his political opponents, has endorsed top Murkowski opponent Kelly Tshibaka, saying "Lisa Murkowski is bad for Alaska."

Murkowski pushed back in a campaign video that promotes her as "independent and tough."

"In this election, Lower 48 outsiders are going to try to grab Alaska's Senate seat for their partisan...