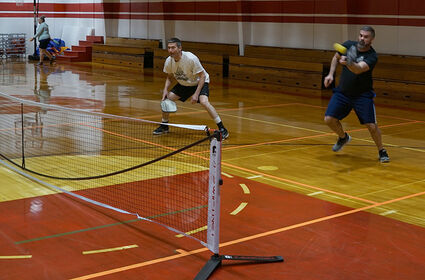 Greg Roberts, left, and Eric Hagelman return a volley during a pickleball game on Nov. 18 at the community gym.

What began 56 years ago on Bainbridge Island, Washington, pingponged around the world, and landed on Wrangell's shores just a few years ago.

Now, pickleball is becoming popular among local players of all abilities.

The sport, played on a 20-foot by 44-foot court with a tennis-type net in the middle, was invented in 1965 by friends Joel Pritchard, Bill Bell and Barney McCallum. According to the official USA Pickleball website, the game was named "pickle ball" by Joel's wife, Joan, in reference to "thrown-together leftover non-starters in the 'pickle boat' of crew races," since the game was c...