Power restored to remaining 90 homes without light in Wrangell 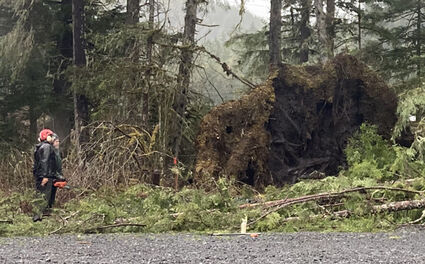 The aftermath of an unexpectedly strong Tuesday weather system affected life in Wrangell, postponing community events and unfurling an outpouring of support amid power outages.

Power was restored to about 90 households early Thursday morning, according to Kim Lane, acting borough manager. Power poles at City Park are up and repaired, and power has been restored to the island.

Secondary downed power lines will still need to be addressed, she said. The line crew will be addressing those just as soon as they are able to. The borough requests downed power line sightings be reported to the Wrangell Police Department at 907-874-3304.

The Southeast Alaska Power Agency had originally estimated a Tuesday night restoration to households beyond Heritage Harbor near City Park and farther south on Zimovia Highway.

Wrangell Municipal Light & Power will be able to come off its diesel generators now that SEAPA's powerlines have been restored, according to Superintendent Rod Rhoades. The regional power agency operates the Tyee Lake hydroelectric project and the lines into Wrangell.

"SEAPA is also coordinating with AP&T and GCI to remove their communications attachments from the damaged poles. The crews will be working late into the night to safely restore power as soon as possible."

The power lines are at the top of utility poles, with phone and cable lines below the electrical lines on the same poles.

All other feeder lines are working in town. Municipal Light & Power still has to assess damage to its feeder at Wrangell Medical Center, and the cracked pole that leads up to the hospital.

Wrangell Island Tree Service got to work clearing downed trees by Wood Street near Alpine Mini Mart at the feeder near the hospital. Arborists Bob Lippert and Glen Decker have more trees to tackle that are leaning against power lines, Lippert said Wednesday.

Community events including Friday's Midnight Madness and downtown Christmas tree lighting were postponed, according to the Wrangell Chamber of Commerce.

Due to utility workers busy with restoring power, and food and craft vendors focused on getting power to their homes, the chamber believed it was in the best interest of the community to postpone the event, Executive Director Brittani Robbins said.

If people have perishable food items to bring in, customer service agent Charity Hommel asked that frozen or refrigerated items be boxed or toted separately and labeled with a name and phone number. Hommel said to call Arrowhead Transfer at 907-874-3314 with any questions.

"We'll keep it going for as long as the power is out for those folks," Hommel said.

After Wednesday's announcement of a delay in power restoration from the initial estimate, Hommel said more people may be in need of refrigeration. "We didn't want people to lose their stores." Arrowhead's own manager will be making use of this, she said, and they want people without generators to know they have this option, too.

Pastor Kem Haggard at Harbor Light Assembly of God offered the church to anyone needing a place to warm up, a hot shower, or a cup of coffee. 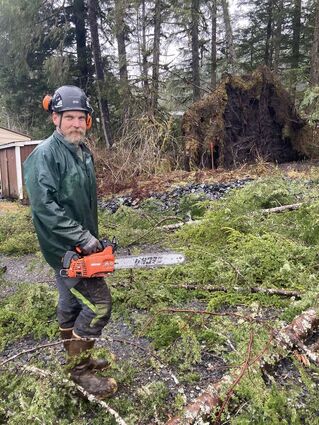 Arborist Bob Lippert of Wrangell Island Tree Service, dwarfed by the root structure of a massive fallen tree at Wood Street near the Wrangell Medical Center entrance on Wednesday.

"We have two showers, a nice warm fireplace, and we will even put some coffee on!" Haggard wrote in Wrangell Community Group on Facebook.

While he had a gas fireplace, Haggard said he didn't have hot water at his own house, so his family made use of the shower at Harbor Light, which he put in a few years ago for visiting missionaries. He figured others in town were in the same boat.

Haggard said just call if you need it. "We can catch up on sleep later," he said.

And John Taylor, Skipper at Summit Charters, posted on social media that he gave two generators to loan to Wrangell for "out the road folks if you need to run your (refrigerator/freezer)."