By The Wrangell Sentinel and Anchorage Daily News 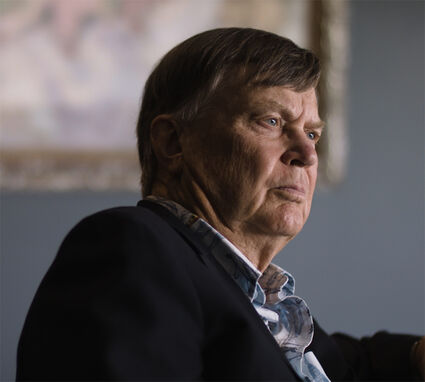 Kyle Seago for "Magnetic North: The Alaskan Character"/courtesy of the Rasmuson Foundation

Ed Rasmuson reflects in July 2020 in the Anchorage Museum, Rasmuson Wing, Art of the North Galleries. He was the driving force for a dedicated space depicting the land and people of the North.

Ed Rasmuson, a banker and philanthropist who led Alaska's largest philanthropic organization, died Jan. 4 at age 81. He managed the Wrangell branch of the National Bank of Alaska in the late 1960s.

Rasmuson was diagnosed with brain cancer about a year ago and entered hospice care three days before Christmas. His oldest daughter, state Sen. Natasha von Imhof, said he died in the company of family in Anchorage.

The family said a memorial service will be held sometime in the spring.

Rasmuson followed Frank Murkowski as manager of the bank's Wrangell branch. There was a rule at the bank, Murkowski said last week, "If you were going to go someplace (with the bank), you had to go through Wrangell." The intent was that new managers "would learn banking and humility" in Wrangell, said Murkowski, who years later turned his career to a quarter-century in the U.S. Senate and as governor of Alaska.

Rasmuson later inherited control of the bank, the largest financial institution in the state, and guided it through the pipeline boom and oil bust before it was sold to Wells Fargo in 2000.

When Rasmuson's father died that year, proceeds from the billion-dollar sale made the Rasmuson Foundation into Alaska's largest philanthropic organization. Rasmuson switched from banking to the chairmanship of the foundation, which distributed millions of dollars each year to benefit the arts, education, public services, nonprofit organizations and community projects.

Murkowski, who started with the bank in the late-1950s, said what distinguished Rasmuson was his determined focus on Alaska, whether developing its economic resources as a banker, or developing its cultural and social resources through giving.

"His interest was really Alaska," Murkowski said. "The state is going to miss him. His contributions are going to be with us for a long time."

In a message announcing Rasmuson's death, the foundation said that under his leadership it invested in the Alaska Native Science & Engineering Program, helped create Pick.Click.Give (which enabled Alaskans to donate some of their annual Permanent Fund dividend to charitable causes), and started efforts in Anchorage to end homelessness and develop world-class trails and parks.

Outside of work, he served on the boards of the University of Alaska and Alaska Pacific University, as a member of the North Pacific Fishery Management Council, as an elder at his church, and was known as an avid outdoorsman and hunter.

Rasmuson was born in 1940 in Houston, the first child of Yakutat-born Elmer Rasmuson and Lile Bernard. Three years after Ed was born, his father moved back to Alaska to take over what was then known as the Bank of Alaska.

Ed grew up in the rough-and-ready streets of Anchorage during and after World War II. He went off to Harvard, earning a degree in history, but he stayed involved in the banking industry on the East Coast.

After the 1964 Good Friday earthquake destroyed the family home, Ed returned to Alaska and went to work in the mid- and late-1960s for the family business in Ketchikan and Wrangell, and then back to Anchorage.

"He liked to hunt. I remember him out in Wrangell, sitting on a log waiting for the ducks to come in, and he's sitting there, reading the Wall Street Journal in his duck gear," said Murkowski. They spent a lot of time duck hunting at Gut Island, on the Stikine River flats.

The bankers worked together to resolve financial issues important to Wrangell. "A lot of our customers wanted to build a house but would not get a survey," Murkowski said. "We found oftentimes we were loaning on a home" that wasn't entirely on the lot where it was supposed to be located. They figured out solutions that worked for the homeowner and the bank, he said.

"There were creative things unique to Wrangell," Murkowski said, such as Ritchie Transportation, which in the 1960s was running its boats up the Stikine River to move people and freight to and from Telegraph Creek, British Columbia.

"It was really a marginal operation," he said. "The business was always about ready to flop," and he and Rasmuson "had a lot of conversations about how to keep it 'bankable' and afloat."

While in Wrangell, he was nicknamed "Fast Eddy," according to his family, because he liked to travel fast, whether by car, boat or plane. Upon leaving town, the local service clubs gave him a custom watch, which he wore daily for more than five decades, his family wrote, noting that he recently told them, "I want to be buried with this watch."

After leaving Wrangell, Rasmuson met a young Canadian, Cathryn "Cathy" Robertson, at a Valentine's Day party. They were engaged that summer and married that fall.

"We saw our marriage as being part of a team, complementing and meshing our strengths," she said Jan. 4. "He was the head. I was the heart. His problem-solving, budget-oriented mind mixed with my passions ... we were a formidable team."

Ed was promoted through the ranks of the bank, becoming president in 1974, the same year construction began on the trans-Alaska pipeline.

"Ed felt that he was a bridge between the old era and the new, from pencils and bank ledgers ... to computers and internet banking," Cathy said.

Named chairman of the National Bank of Alaska board in 1985, he served in that role until the decision to sell the bank. At that time, it held almost half of all bank deposits in the state.

After the bank's sale, he became chairman of the Rasmuson Foundation, which had more than $400 million in assets at the time.

"Every man hopes that what he accomplishes could perhaps be carried on by his son," Elmer Rasmuson said shortly before his death in 2000. "I managed to have that with Ed."

Rasmuson is survived by his wife of 52 years, Cathy, his older daughter, Natasha von Imhof, and his younger daughter, Laura Emerson. He was preceded in death by his two sons, David and Bruce.