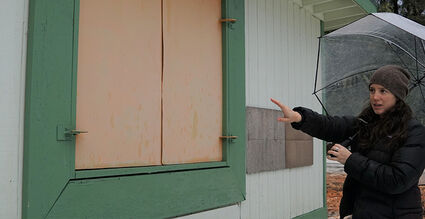 Valerie Massie, coordinator at Wrangell Cooperative Association's Indian Environmental General Assistance Program, points out the modifications that will be made to a former concessions stand at an old ballfield in City Park on a blustery Jan. 14 day. The stand will be converted to accommodate a commercial-scale composter that IGAP plans to purchase in February for the community garden.

A former concessions stand in City Park is slated to be the site of a commercial-scale composter that could give second life to food scraps on a bigger scale, potentially reducing the volume of trash that Wrangell pays to ship off the island.

The folks reviving the community garden have budgeted $19,500 toward the composter, which will be located at the garden on the former Lions ball field.