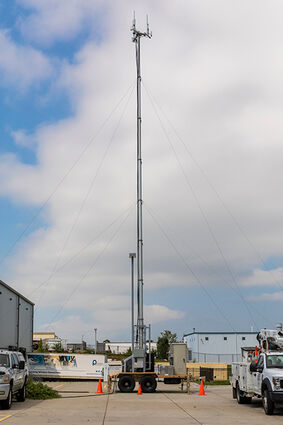 The movable "cell on wheels" pop-up tower pictured at Pierson Wireless' Omaha, Nebraska, headquarters is similar to the units that will be used in Southeast Alaska for the Central Council of the Tlingit and Haida Indian Tribes of Alaska broadband wireless network.

The temporary, pop-up mobile towers have been ordered for the Central Council of the Tlingit and Haida Indian Tribes of Alaska's pilot project that will provide wireless internet service in Wrangell, but it will be later in the year before the system goes live.

Chris Cropley is a network architect at Central Council, which is setting up the federally funded broadband service named Tidal Network. He's been there since last April.

His job is a mix of disciplines - part technical, part administrative. He's overseeing the $2.5 million first-phase buildout in Wrangell, which "requires a lot of...