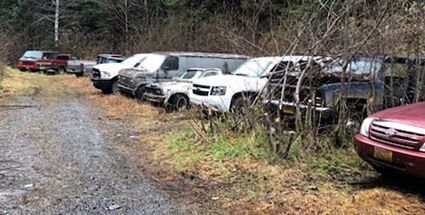 The U.S. Forest Service wants to clean up and improve the parking area at Roosevelt Harbor, which is available for hunters and recreational users - but which also is littered with several vehicles far short of working order.

The Wrangell Ranger District wants to restore a parking area at Roosevelt Harbor. The problem is about 70 vehicles in various stages of decay on top of it, going back a couple of decades at the site on Zarembo Island, about 12 miles southwest of the Wrangell City Dock.

Roosevelt Harbor is vulnerable to pollutants and sediment from runoff at the parking lot, said District Ranger Clint Kolarich, of the Wrangell Ranger District last Tuesday.

The harbor is a popular spot for hunters and campers, offering miles of old logging roads for access into the interior of the island.