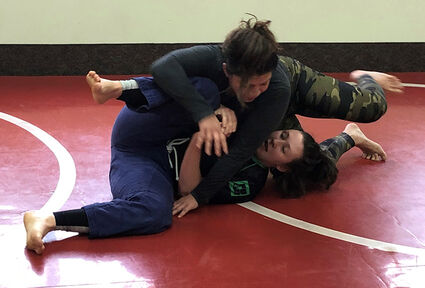 UFC fighter Nicco Montaño (top) and Victoria Carney practice jiu jitsu at the community gym. Montaño swung by a couple of the classes while she was in town. She rolled - jiu jitsu term for sparring - with Carney and instructor Matt Nore on Feb. 15. Nore, as a white belt, said it was humbling to get schooled by Montaño, a purple-belt in jiu jitsu.

A mixed martial artist who was the inaugural flyweight champion on a 2017 television show - and made history as the first American Native woman Ultimate Fighting Championship title holder - punched in a short visit to Wrangell in February.

The purple-belt jiu jitsu holder, who was in town to visit a friend, made a surprise drop-in on a Wrangell class Feb. 16 without telling the participants who she was, at first.

"Normally, it's been Victoria Carney and I," Wrangell jiu jitsu instructor Matt Nore said Feb. 22. "Victoria said, 'Oh, have you ever done jiu jitsu before?' And she said, 'I'm a p...