Scientists warn of tougher drought conditions in Oregon and Idaho 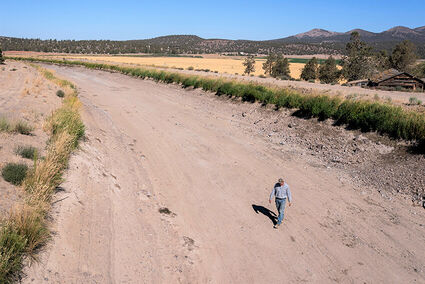 Matt Lisignoli walks through an irrigation canal near Madras, Oregon, that ran dry in early August after the North Unit Irrigation District exhausted its allocated water. Climate scientists in the Pacific Northwest are warning that the region can expect even tougher drought conditions this summer than in the previous two years.

PORTLAND, Ore. (AP) - Climate scientists in the U.S. Pacific Northwest warned March 3 that much of Oregon and parts of Idaho can expect even tougher drought conditions this summer than in the previous two years, which already featured dwindling reservoirs, explosive wildfires and deep cuts to agricultural irrigation.

At a news conference hosted by the National Oceanic and Atmospheric Administration, water and climate experts from Oregon, Washington and Idaho said parts of the region should prepare now for severe drought, wildfires and record-low stream flows that will hurt salmon and other...