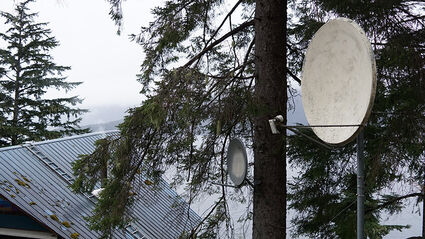 Two satellite dishes are mounted outside of Kitty Angerman's house at 7-Mile. The dish on the tree is no longer used, and the pole-mounted dish hasn't been able to receive Alaska network stations since DISH Network switched satellites in mid-January. Angerman and others have been trying to get their service restored since the channels were lost.

Options for television in Wrangell narrowed in mid-January when some DISH Network customers lost access to the Alaska affiliates for ABC, NBC, CBS and FOX when the provider switched satellites.

After two months of calls to the satellite TV provider and technicians, a solution might finally be on the way.

Kitty Angerman, who has been a DISH customer for more than 20 years, said when the channels disappeared from her menu she didn't think much of it because it's happened before. Unlike past instances, however, the channels didn't come back this time.

The satellite TV option has always been a...