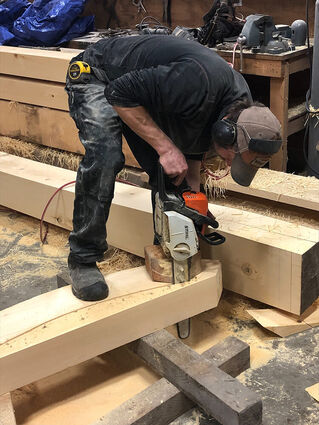 Silas Flor, of Petersburg-based Rainforest Contracting, cuts out curved braces for the frame of the Anan Wildlife Observatory. The work is scheduled for completion by June, in time for the bear viewing season.

When contractor Jesse West said, "we destroyed everything," it sounds pretty bad, out of context.

But that's exactly what his Petersburg company Rainforest Contracting was hired to do - pull down the old Anan bear viewing deck and walkway and put up a new one for the U.S. Forest Service.

"So far we've demo-ed everything that was up there," West, president of Rainforest Contracting, said March 29. "It's all stacked in piles and ready to get taken out of there."

The concrete and wood and metal roofing will be disposed of at the dump in Petersburg.