By Kevin Freking
The Associated Press

Murkowski describes Young 'as colorful as they came' 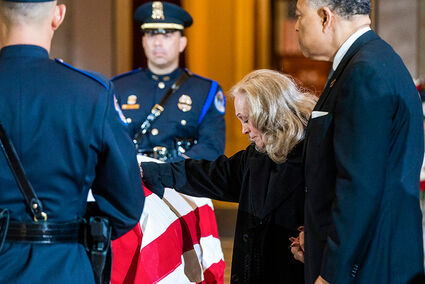 Anne Walton pauses at the casket of her late husband, Alaska Rep. Don Young, as he lies in state in Statuary Hall on Capitol Hill in Washington on March 29.

WASHINGTON (AP) - Congressional leaders on March 29 hailed the late Republican Rep. Don Young, the only congressman Alaska has known for nearly the last half-century, as a gruff but pragmatic lawmaker who got things done for his constituents.

Young was the longest-serving Republican in the history of the House. He died on a flight to Alaska March 18. He was 88. Former colleagues honored him March 29 as he joined a select few chosen to lie in state at the Capitol.

Attendance to the ceremony was limited to provide for social distancing. But colleagues and congressional aides lined up in the h...