Pope apologizes for abuse at church-run schools in Canada 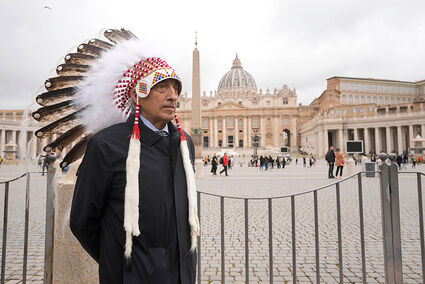 Former national chief of the Assembly of First Nations in Canada, Phil Fontaine, stands outside St. Peter's Square at the end of a meeting with Pope Francis at the Vatican on April 1.

VATICAN CITY - Pope Francis has made a historic apology to Indigenous Peoples for the "deplorable" abuses they suffered in Canada's Catholic-run residential schools, and said he hoped to visit Canada in late July to deliver the apology in person to survivors of the church's misguided missionary zeal.

Francis begged forgiveness during an audience April 1 with dozens of members of the Metis, Inuit and First Nations communities who came to Rome seeking a papal apology and a commitment from the Catholic Church to repair the damage. The first pope from the Americas said he hoped to visit Canada...