Farmers, ranchers, tribe and salmon all suffer for lack of water 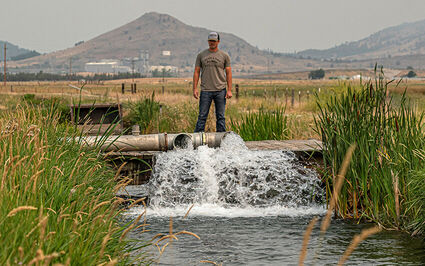 Justin Grant watches water flow from his agricultural well in Klamath Falls, Oregon, in this 2021 file photo. Dozens of domestic wells have gone dry in an area near the Oregon-California border where the American West's worsening drought has taken a particularly dramatic toll.

PORTLAND (AP) - Farms that rely on irrigation from a depleted, federally managed lake on the California-Oregon border, along with a Native American tribe fighting to protect fragile salmon, will both receive extremely limited amounts of water this summer as a historic drought and record-low reservoir levels drag on in the U.S. West.

More than 1,000 farmers and ranchers who draw water from a 257-mile-long river that flows from the Upper Klamath Lake to the Pacific Ocean will have access to roughly one-seventh the amount they could get in a wetter year, a federal agency announced April 11. Do...