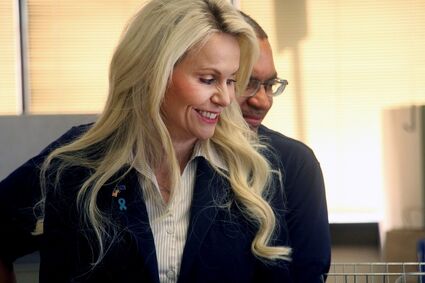 Republican Kelly Tshibaka filed to run in Alaska's U.S. Senate race against incumbent Sen. Lisa Murkowski. Her husband, Niki Tshibaka, accompanied her to the Division of Elections office in Anchorage on April 11.

Murkowski, in office since 2002, brought in more than $1.5 million in the three-month period ending March 31, according to a filing with the Federal Election Commission.

Murkowski ended the quarter with $5.2 million on hand with no debt, the records show.

Republican Kelly Tshibaka, who is challenging Murkowski, raised $673,383 during the last quarter, a total that included donations from a fundraiser at Trump's Mar-a-Lago resort in Florid...