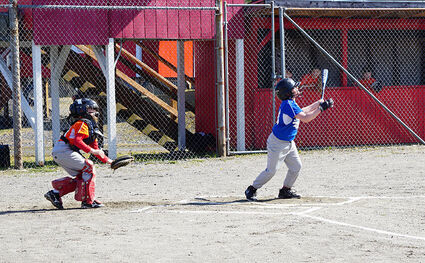 The Wrangell Sharks had the first at-bat last Saturday during the first game of the Little League season. Connor Blake, the first batter of the game, hit a home run on the second pitch, as catcher Malachi Harrison of the Rays was left empty-handed.

The community turned out for Little League opening day last Saturday, with two Wrangell teams going head-to-head in a spirited game at the Volunteer Park ballfields.

Minor league teams the Rays and Sharks, comprised of 8-, 9- and 10-year-old players, played the first game of the season, with the Sharks winning 6 to 5.

Maintenance crews prepped the ballfield before the opening ceremony as teams, friends and families gathered in anticipation of the game.

"Thank you for coming out and supporting your Wrangell Little League," said board member Briana Schilling as she addressed the crowd. "I wa...