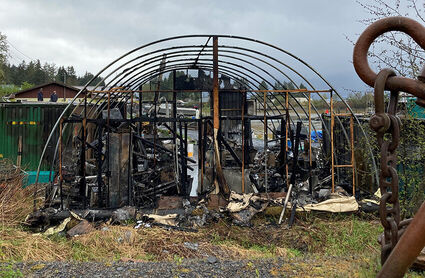 Only the skeleton remains of a fabric-covered workshop at Svendsen Marine after a fire on May 3. The Quonset hut caught fire shortly after 3 a.m. No one was hurt, Fire Chief Tim Buness said, but the hut was totaled.

A workshop at a Wrangell boat-building company on Case Avenue caught fire and was destroyed in the early morning hours of May 3.

A firefighter was hurt in the response to Svendsen Marine at 3:18 a.m. after falling but is OK, Fire Chief Tim Buness said May 3. The firefighter was taken to the hospital and released.

An occupant inside the Quonset hut workspace - a half-moon, fabric-covered "tinker shop" - was also unharmed, he said.

It took 30 minutes for 18 firefighters to put out the blaze, including mop-up of hotspots, which originated from a woodstove inside the hut, Buness said.