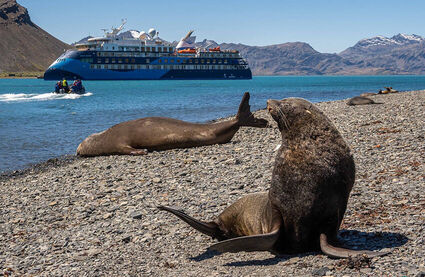 The 342-foot-long Ocean Victory, shown here on its first voyage to Antarctica, is scheduled to stop in Wrangell on Thursday during its inaugural season in Alaska. The vessel, completed in 2021, is chartered by American Queen Voyages for Alaska and Pacific coast cruises.

The chamber of commerce is planning a welcome ceremony for the first ship on Wrangell's official cruise calendar, which also happens to be a brand new vessel making its inaugural sailing to Southeast.

The 186-passenger Ocean Victory, chartered by American Queen Voyages, is scheduled to arrive at 8 a.m. Thursday at the City Dock.

Chamber Executive Director Brittani Robbins on Monday said the ceremony is planned for 10 a.m. Thursday and will feature Tlingit dancers, a presentation of a key to the city and a commemorative plaque exchange - the borough to Ocean Victory, and Ocean Victory to th...