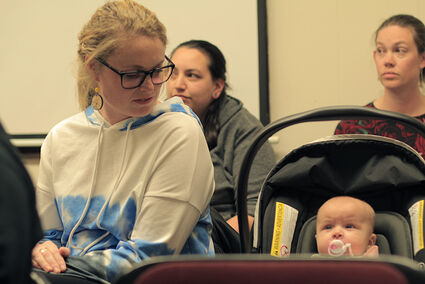 New parent Tawney Crowley (back row, from left) and teacher Tasha Morse were among the those who attended the assembly meeting May 10 to speak on the borough's contribution to next year's school budget. Teacher Laurie Hagelman looks over at Crowley's 4-month-old infant Ryleigh, seated in her carrier.

The assembly on May 10 unanimously approved $1.617 million as the borough contribution to the school budget for the 2022-2023 academic year, more than $300,000 higher than this year's local funding level and at the maximum allowed under state law.