Hospital conducts casualty drill to test itself and learn 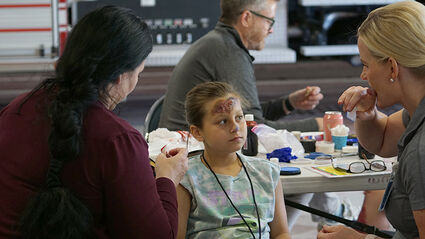 A mass casualty exercise June 7 was the first one held at the Wrangell Medical Center in its 16-month-old facility.

The drill, which simulated a plane crash, was used to see where improvements could be made in the emergency operations plan. It involved about 70 staff members from the hospital, EMTs and volunteer firefighters.

Eleven community volunteers of various ages were made up to resemble victims with head wounds, lacerations and other traumas requiring stabilization, medevac or blood transfusions and the like.

"Anytime we run a drill like that, the goal is to stress our systems, seein...