Chugach Ranger will be unwrapped for viewing over the Fourth 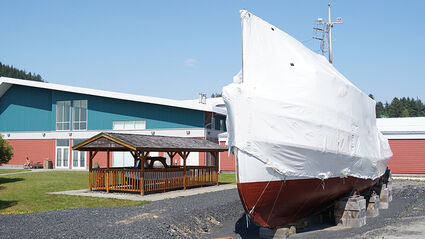 The historical Chugach Ranger wooden boat, built in 1925, is being unwrapped this week and will be on display for about two weeks before going back under the plastic. The former U.S. Forest Service work boat is on permanent loan to the Nolan Center, where it resides next to the 19-foot runabout Emerald donated by former Gov. Frank Murkowski.

Plans to make the almost-century-old U.S. Forest Service Chugach Ranger workboat a permanent display at the Nolan Center are slowly moving forward, but until then the 62-foot wooden vessel will be temporarily on display for the Fourth of July weekend.

The protective wrapping on the boat will be removed by next Sunday so the vessel can be inspected and assessed in order to proceed with plans to eventually build a protective shelter and walk-around ramp for easier viewing. Those who want to see the uncovered boat will only have two weeks before it's put back under wraps.